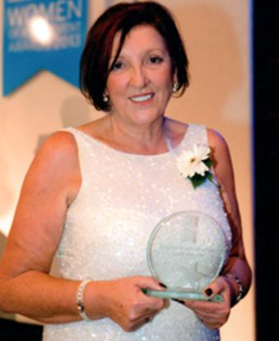 As a woman, if you were to think of a dynamic, creative and rapidly growing industry that could take you places (excuse the pun) - the rail industry probably isn't the first, second, or even third industry that would spring to mind. The UK makes more than a billion passenger railway journeys each year - but despite that it's an industry that few of us actually know much about

It's also an industry we begin to form preconceptions about from an early age. Some of the nation's most treasured books, such as Thomas the Tank Engine depict our railways controlled by a stoic male - the Fat Controller. As we get older this image is reinforced - we learn about the history of the nation's steam railways from Stephenson's Rocket onward, while being shown images of burly men covered in coal. Although the rail industry has rapidly changed since then - those male dominated images remain with us.

In this male dominated sector Jackie Chappell had a successful career in the rail industry where she rose from being a part-time employee selling tickets to become the Chief Executive of the Industry's Training and Competence Company, making her the first ever women CEO in the British rail industry.

From the first female train drivers in the 80's who saw men refusing to get on trains when a woman was at the helm to today where the rail sector is working hard to change its image - through Jackie Chappell’s fight for equality she has broken the glass ceiling and changed perceptions to help women put their best foot forward in their career.

Following this career, Jackie created her own company, Ironing Lady (a social enterprise organisation), which in the last 10 years has developed a reputation for quality and innovation and now employs 20 people. Jackie is very keen to make sure her staff have the opportunity to develop and achieve their full potential through skills and external qualifications. Despite being a fantastic leader, she is always happy to 'muck in' to get a job done. Outside of work Jackie supports her local church and raises money for many different charities.

Friends of Jackie call her confident, a fantastic leader, an inspiration. They also admire her ability to always look on the positive side of her ability.

Register to hear Jackie Chappell below: