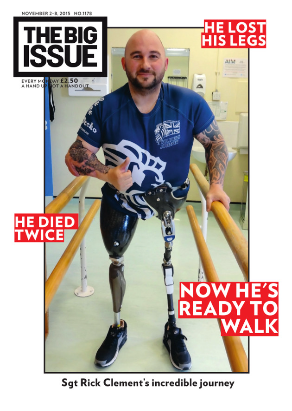 Did you see the former soldier who lost his legs during the war in Afghanistan has walked in public for the first time at a Remembrance Sunday service? It was the inspirational Sgt Rick Clement who stepped on a bomb during the conflict in 2010. Despite medics saying he may never walk again, he used his prosthetic legs to lay a wreath at Blackpool cenotaph.

He said: "I took my first three steps and there was a wave of emotion - something I've not experienced that much, well ever, before."

He completed the Great Manchester Swim earlier this year and was also photographed by the Canadian singer Bryan Adams, with the images appearing in an exhibition on wounded servicemen and women.

On the 27th May 2010 whilst serving as an Infantry Platoon Sergeant in Afghanistan with the 1st Battalion the Duke of Lancaster’s Regiment my life was thrown into turmoil.

It was on a routine foot patrol that I stepped on a pressure plate I.E.D. (Improvised explosive device). Thanks to the excellent training and quick thinking of my lads I was given emergency first aid and evacuated back to camp Bastion before being flown back to the UK. It was a miracle I even survived or rather a credit to all the medics from on the ground, the ones on the Helicopter that picked me up and those back at camp Bastion.

Once I awoke 3 weeks later in hospital I found out that I had lost both my legs suffering extremely high amputations and that my genitals had also been severely damaged. I got through these dark times with the support of my family and in particular my parents. Over the next few months I gradually became stronger and more independent so I was moved to the rehabilitation unit in Headley Court. Here they start to build up your strength and look at the use of Prosthetic limbs. After a year of trying I decided that it was not possible at that time for me to use prosthetics because of how high my amputations were. I had however achieved many things such as being back driving, swimming and gaining a lot of independence back.